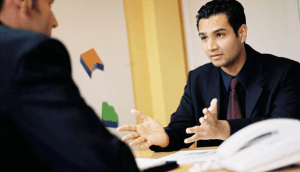 It is very important to keep in mind that the examiner is looking for you to adjust the level of formality as you progress through the test. Here’s a brief summary:

Part One: informal, friendly – consider this to be like two friends chatting over lunch.

Part Two: semi formal, informational – consider this to be like you making a presentation to colleagues you work with.

Part Three: formal, academic – consider this to be like a job interview, where you are using your most formal language, sentence construction and grammar.

Here are some expressions that would fit in each of the three sections:

Yeah, I love travelling – don’t get much time for it though, what with having to work all week and then take the kids out at the weekend.

I don’t take a lot of photos, but I do check out what my friends put on Facebook. Most of them are pretty bad though – none of us are very good at it!

Part Two (the topic card was about a friend you know well):

I’ve known him for about 5 years now, and although I didn’t imagine we’d become friends at the time, we’ve actually become quite close. I enjoy his company because we have very similar tastes in movies and music, so it can be a lot of fun going out at the weekend with him.

Many companies are interested in promoting their products, and with the increasing use of technology and social media, this means that the audience has in many respects become much wider than traditional forms such as television or radio. Having said that, a significant percentage of advertising budgets are still directed at these areas.

You should be able to see from the examples above that the language has become more formal at each step of the speaking test.

The comments on my writing were very professional and comprehensive. With the support of IELTStestONLINE, I can now write a structured and clear IELTS essay.

One stop place for your IELTS practice

www.ieltstestonline.com is one stop place for your IELTS practice. You are given the basics and the advanced modules with practice test to give you a feel of the real exam.

I got the score that I was aiming for

I just received my IELTS results last week and I got the score that i was aiming for – an overall band score of 6.5 on my first take of the exam.

I missed my scoring in writing as i couldnt give more attention but overall scoring was satisfactory for me. The materials are comprehensive so i would again like to enroll to your course so that i could score even better next time.