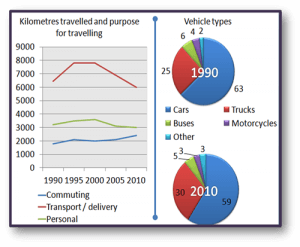 The charts show information about the number of kilometres travelled in an average month and the distribution of vehicle types in Britain.

Want to remove this advert? Become a full member!

Data is given for the distance travelled for three different reasons, as well as charts indicating the percentage of vehicle types in the UK in 1990 and 2010.

The most significant trend is that the most kilometres were travelled for transporting and delivery reasons. In 1990, this figure was approximately 6500 kilometres, rising to almost 8000 kilometres by 1995 and 2000 but falling to 6,000 by 2010.

Personal travel accounted for about 1,200 kilometres a month more than commuting for 1990 to 2000, but commuting distances increased from 2000 to be within approximately 700 kilometres of personal driving, with the former being on 3,000 and the latter being around 2,300.

The pie charts indicate that in the twenty year difference, the percentage of cars fell by 4% while the number of trucks increased by 5%. Over the same period, buses and motorcycles both fell by 1% while the category labelled ‘other’ increased by 1%.

Overall, it is clear that there were a number of changes in the distance travelled and type of vehicles from 1990 to 2010.

The materials provided are simply fantastic

Your website is really awesome, and the materials provided are simply fantastic. It solved all the confusion I do have about IELTS examinations. Now I am more prepared than ever. I recommend it to all who are preparing for IELTS General Training and Academic Test. Thank you very much for providing this website.

Will surely increase your band score

I would say IELTS test online subsription is must to have for anyone who is preparing for your IELTs exam. It is well organized and provide step by step guideline for preparing IELTS exam. All modules are covered in great details and those will surely increase your band score above to your expecatoin.

This course is very helpful, alot of materials , tutorials take you step by step , excellent value for money, really recommend it to everyone .