Academic IELTS Task 1 model answer 7 – How children get to school. This is a Band 9.0 (top score) model answer. 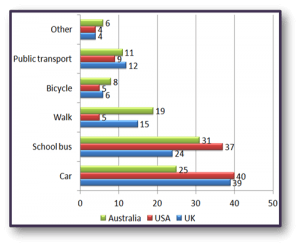 The chart shows ways that schoolchildren get to school in three different countries.

Want to remove this advert? Become a full member!

The chart presents information about how pupils in three different countries travel to school, separated into 6 different categories.

For the United States and the United Kingdom, the majority of students travel by car to school, with figures of 40% and 39% respectively. In Australia only a quarter of students use this mode of transport.

The school bus is the most common method of getting to school in Australia; in the USA the number is only slightly behind those travelling by car. Less than a quarter use the school bus in the UK. Almost four times as many Australian students walked to school compared to the USA, with the UK being closer to Australia at 15%.

The remaining three categories showed only slight differences between the countries, with public transport being followed by cycling, and finally a category marked as ‘other’, which represents only about one twentieth of the total in each country.

In sum, there are differences between the countries, but the school bus and cars represent the most common ways for students to travel to school.

We hope you found Academic IELTS Task 1 model answer 7 – How children get to school useful! Now move on to model answer 8.

Very good practice of IELTS academic vocabulary. There are so many words all in example sentences, which makes it easy to learn for your own essays.

The IELTS TEST ONLINE is very professional & very helpful. I strongly recommend it. Have been studying for a while. It makes it easy to prepare for the exam, which I have in about a month. I already feel confident enought to go through it. Thank you!