Then enrol in one of our membership plans and get access to ALL the resources on this site, no advertising, your own support tutor to answer your questions as you study and 7 downloadable eBooks. MASTER Members also get 10 writing tests assessed (with comments, corrections and estimated band score) and TWO live speaking assessments (one to one with your tutor, followed by a feedback session and estimated band score). Find out more here!

Want your IELTS writing assessed with a band score?

Did you know that you can have TEN complete writing tests (10 x Task 1 and 10 x Task 2) assessed by your own support tutor and former IELTS examiner if you enrol in the MASTER Membership? Your tutor will correct any errors, give you suggestions for improvement and give you an estimated band score. Find out more here

Want a live speaking assessment one to one with a former IELTS examiner?

Did you know that you can have TWO live speaking assessments one to one with your tutor? We run a full mock speaking test with all 3 sections, followed by a discussion session where we talk your strengths and areas for improvement and tell you your approximate band score. Remember that all of our tutors are former British Council trained IELTS examiners with over 16 years experience, so you can be confident in our feedback! Find out more here

Want to earn $50 USD per month - EVERY MONTH - just for referring us?

We offer the option for a school or institution to become a subdomain partner, where they have a copy of ALL the resources on our site but on their own domain name (e.g. 'ielts.yourschool-or-company.com'). Every month that school or institution remains a partner, you generate a $50 USD commission - and you don't need to do anything! You earn $50 USD per month for each subdomain partner that signs up with us, so you can generate passive income with very little work! Find out more here 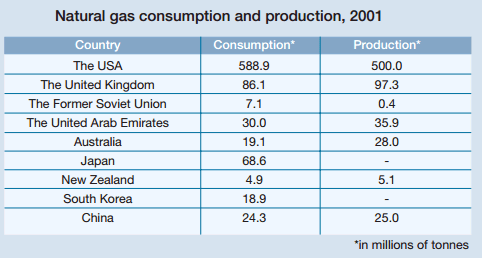 The table below shows the production and consumption of natural gas in different countries in 2001.

The table provides data about the use and production of natural gas in nine different countries in 2001.

The most striking trend can be seen in the USA, where figures are over five times higher than those of any other country. With the exception of the former Soviet Union, other countries’ production figures were higher than their consumption figures, although there is no data provided for either Japan or South Korea.

New Zealand had the lowest consumption and the closest correlation to its production, with 0.2 million tonnes excess. Australia produced nearly one- third more natural gas than it consumed. The United Kingdom produced over 10 million tonnes more than it used, twice the excess produced by the United Arab Emirates. China consumed only 0.7 million tonnes less than its production. In contrast, the former Soviet Union accounted for far less production than it did consumption, using nearly 18 times the amount it produced.

Although the majority of countries produced more gas than they used in the same year, the rate the of both production and consumption was markedly different between them.

I find this online course very effective. It has very well planned lessons and test corresponding to it. The practice tests are upto the mark and also help you in knowing where you stand by giving actual grades. The tips for every lesson help you how to tackle every section. I am quite sure after getting this course everyone would recommend to those students who are looking for quality IELTS course. I strongly recommend it to everyone who wish to get ielts 7+band. Thank you!

The IELTS TEST ONLINE is very professional & very helpful. I strongly recommend it. Have been studying for a while. It makes it easy to prepare for the exam, which I have in about a month. I already feel confident enought to go through it. Thank you!

IELTSTestOnline is a comprehensive online IELTS review course yet very simple and effective that can suit to any English level of proficiency. Kudos to the team!