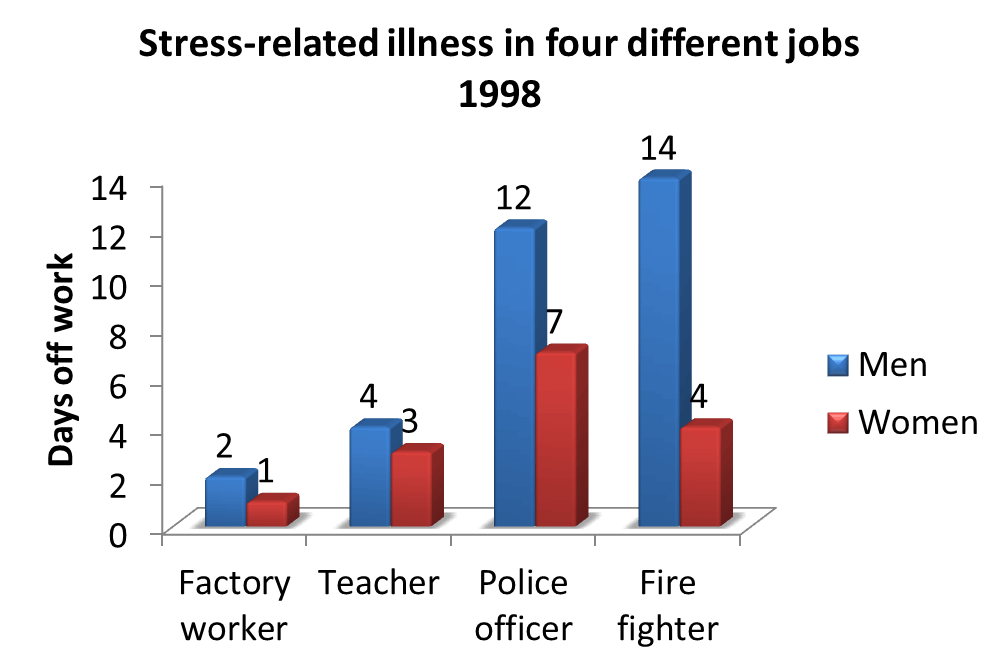 The chart shows days taken off work due to stress related illnesses by job for men and women.

Comparing four different occupations in 1998, the chart illustrates the impact of illness due to stress and its correlation to days absent from work for both sexes.

The most obvious point is that men rated higher than women across the chart. The most striking difference came from fire fighters, where men took more than three times as many days off, averaging 14 days in the year compared with 4 days for women. A similar trend can be observed with police officers, with men being absent for nearly twice the number of days.

The result for factory workers and teachers is not so pointed, but women still took fewer days off. For both occupations, the difference between the sexes was only one day a year, with only one day a year for women in factory positions, rising to three for teachers. Men were absent for two days and four days in the same industries.

Overall, it can be seen that men take more time off work than women for stress related concerns.

I can see how much I have improved

Thank you very much! I bought some other IELTS courses online but none of them provide the support you do – I can see how much I have improved. The forum on the web page is great for me and for all candidates, we can go there and express our concerns and discuss our problems.

I would definitely recommend this online course, it really helps me organize things up specially on my writing and speaking skills. very good examples and procedures that you can easily understand. more power and God bless

I strongly recommend it

IELTS test online is very helpful. Through this online tool, I could familiarize myself with the test format, practise online, and read model essays for the writing test. I strongly recommend it for anyone intending to take the IELTS academic or General training exam.