Here’s a reading exercise for CEFR Level C1. Read the text and answer the questions that follow. If you are Level C1, you should answer at least 10 out of 12 questions correctly.

A brief history of the Olympics

Most people have heard of the Olympics, a sporting event held every four years, where people from around the world congregate in one place to compete in various sporting events. But how much is known of its history?

A  The Olympics first began in Ancient Greece nearly 2700 years ago as a religious occasion, very different from the secular(2) event we see now. It was primarily a festival celebrating the ancient Greek gods. Named after the goddess Olympia, the festival was actually in praise of the god Zeus and was held in a specially constructed stadium called The Hippodrome. Unlike the modern Olympics, there were very few events, the most popular being running, fighting and javelin
throwing(3). 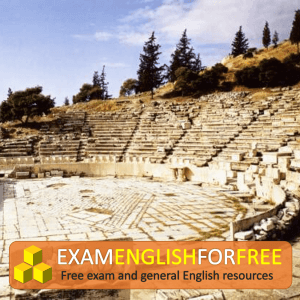 B  For the athletes, the honour of winning was the reason for participation, not only for themselves, but also for their city, as the winner of each competition was given prizes to bestow(4) on the citizens of his hometown. Prizes were often food – grain and meat – but occasionally also precious metals. Naturally, this engendered(5) a degree of rivalry amongst competitors and cities, but one of the most notable aspects of the Olympics was that, for the duration of the festival, there was peace, at least outside the arena(6). By government decree, there were no arguments or hostilities, convicted criminals were to be treated well and the death penalty was not carried out. All wars – domestic and international – had to be suspended. Nothing of importance was discussed as the games became the paramount(7) focus of the nation.

C  Despite the prizes, the honours and the enforcement of peace, the Games were not entirely philanthropic(8) in nature. In accordance with the customs of the time, they still carried the traditional exclusion of women and slaves, who were not allowed within the stadium. Transgression of this rule resulted in severe punishment. It was not until 1900 that women were finally allowed to compete.

D  Nonetheless, for nearly 700 years, the Olympics represented something noble in that it promoted, albeit for only five days, a period of peace around which the whole country could gather. It was somewhat ironic(9), then, that the original Games were abolished after the Roman invasion in AD356, and for a period of just over a millennium(10) and a half, there were no more Olympics.

E  It was in 1896 that Baron Pierre de Coubertin, a Frenchman, and Dimitrios Vikelas, a Greek, revived the games. Fittingly(11), the first of the modern Olympics was held in Greece, but although the intentions of the Games were good, they no longer represented the original ideals of the Olympics. World War I caused one game to be cancelled and World War II caused the cancellation of another two – a far cry from the period of peace the games first inspired. To try and revive the
spirit of peace and understanding that the original games represented, Baron de Coubertin designed an Olympic flag with five intertwining rings which symbolised the union of the five continents. This was first used at the Antwerp Olympics in 1920 together with the release of doves at the beginning of the Games as a symbol of peace. However, athletes competing to be the best in the world, financial rewards in the form of sponsorship, financial problems and allegations
of drug abuse have further tarnished(12) what was once the embodiment of a desire to bring people
together harmoniously.

F  However, there is still much to admire in the Olympics of today. It has become an opportunity for people of nearly 200 nationalities to come together in the spirit of friendly competition, much as they did nearly 3000 years ago. Now the rewards come in the form of medals and the knowledge that the athlete is one of the best in the world. The importance of the games has been reinforced with the introduction of the Winter Olympics and the Paralympics Games, the latter of which is
specifically for people with physical disabilities. It can now be said that the Olympic Games is truly a competition for all people.

Now test your understanding of the text – which of these headings best matches with which paragraph? NOTE: You will not use ALL of the headings!

Using NO MORE THAN THREE WORDS AND/OR A NUMBER, answer the following questions.

Everything is great,the program,the staff specially Patrick, I am very happy that I start to use Ielts test online and now I feel more confident and I sure that next time I do the test I will smash it. Strongly recommended.

I owe a great deal to IELTStestonline

I actually sat on the IELTS with the preparation from your Standard Plan and got very good results. I owe a great deal to IELTS test online. I would like to say that your tests were very similar to the real test and gave me a good platform to get desired results. I want to thank you and your team for creating very pertinent yet very exhaustive online resource for IELTS.

This course is one stop learning library for IELTS exam.